My hay-man’s salutary kisses of hello (4 times on alternate sides) and goodbye (another 4 times!!) have been, incrementaly over the last two years, getting less and less cheek-based and heading more and more towards the mouth region.? The lip-corner was finally reached on Saturday with full eye-contact and an amused grin on both our faces before I “ran away” into the herd and he jumped on his ancient orange Ferguson and “ran away” far slower due to having to reverse down a tiny green lane sided by huge drainage ditches which he failed to negotiate with his usual skill indicating he was as flustered as me.
Up until now I have been passively observing this sloth-speed courtship with much curiosity and a little amusement – almost a social experiment, if you will.? But now we have reached the point where I really ought to make a decision as to whether I like him in “that way”.? And I really am not sure.
He lives with his parents.? Allegedly, he has never had a girlfriend (but you cannot, nor should not, believe everything 90 yr old, pinny-wearing old biddies say).? He is much younger than me.? Do I really want a 33 year old virgin for my 49th birthday?? (A small part of me is asking if that is a trick question.)? He appears to be almost as socially inept as myself so this could go on for some time yet and I am not getting any younger.? All my friends think I can do better (really?? Bi-polar, alcoholic, ex-wild-child with a pedantic, smart-arse bent.? Mmmmm?? I may not be quite the catch they think I am).? Incidently, I? am the one on the left with her leg in the air.? And that cleavage is not real.? I squooshed them together with duct tape.? This is what I looked like aged 33.? Sixteen years ago.? I am a bit more haggard now.? But you can see my point – I have the potential to horrify a less cosmopolitan chap. 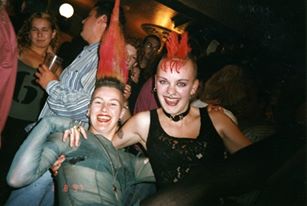 Our conversations are limited to my horses, his cows and sheep, his land, my land, animal diseases and poo (which is mainly my fault, I admit, but he is a grown-up and could take a bit more of the control now and then, silly man).? I risk losing my supply of good-quality, low-cost forage if this does not work out well.? He is never going to sweep me off of my feet.? He will never be my Mr Darcy nor my Mr Big.? Not my Romeo nor my Rhett.? He is not horsey.
He is not purple (which is actually amazing for these parts).? He is calm and kind (apart from when he argues with his father and then no-one can understand a word they are saying as their arms flail about at a speed only surpassed by their swearing).? Because he appears almost as socially inept as myself I think he will not judge me on my inability to coherently string words in a row when outside of my comfort zone.? He once asked me if it is possible to teach him to halter-train his cows.? I liked that.? (And yes, I can.)? I could get good-quality, free forage.
And the use of a tractor!!!!!! Or two!!!? And lots of other farming equipment that I would NEVER be able to afford to buy!!? No longer would I have to mow my training field by dragging a lawn-mower that is missing a front wheel backwards behind my motorbike.

No longer would I have to park the dilapitated van down-hill from the 300kg round bale of hay I am going to high-speed roll and bump into the back.? (Velocity is your friend when you weigh a sixth of the weight of the item you need to “lift”.)? Sadly, I have no footage of this.? He understands the concept of fencing intended to keep large AND small livestock from pissing off down the lane and eating someone’s crops and he would NEVER embarass himself by peeing on a live electric fence in front of your friends (you know who you are.? I remember it.? Sadly, I have no footage of this either).? He is practical.
I googled French dating etiquette.? I need to get to know him better if I am to make an informed decision.? And I need to know I am not going to fall into any hidden cultural traps whilst I go about it.? For all I know I might already be accidentally betrothed to him.

Phew!!!
I am ok.? But it was a near miss.? It turns out there really is a difference in how the French and the British (and, more so, the Americans) go about finding their significant “other”.? Who’d a thunk it.
No wonder he did not ask me out for a date 2 years ago!? I thought I was reading the signals wrong at first.? The French do not date as we know it.? But then, Quel Surprise!!? They are not exactly known for their conformity (although they do.? Very much so.? But it is a conformity to their cultural practices and not to anyone else’s.? Which is kinda cool).
In retrospect I have come to realise my hay-man has been courting me.? I just did not realise it!? I just thought he was being very friendly!? So now what do I do?
I do what any self-respecting geek does.? I google that too.

I am going to learn to flirt!? I am going to flutter my eyes until I have an epileptic fit.? I am going to flip my hair about like a horse trying to rid himself of flies.? I am going to giggle and squeal, squirm and feel.? I am going maintain way too much eye contact and touch his leg even if I have to chase him down the road to do so.
I know I am going to do it badly but that does not matter at this point.? I started this article confused and leaning towards the mercenary point of view that maybe if love was not going to happen then maybe I could get a helping hand towards fulfilling my challenge of becoming an international showjumper before I am 50.? But who cares.? Um …? Me, actually.
I can’t do this.
(sigh)
I remember when I was a teenager.? Just.? Lots of the girls my age went out with boys because of the car they drove.? I never understood that.? And I still don’t.? I do want to have a fulfilling relationship.? And I do need a tractor.? (And especially a? bigger car to pull my trailer to take me to horse shows and to clinics at Louise Morley’s, international showjumper extraordinaire).? My lack of money and infrastructure is the only thing stopping me at the moment.? But I must continue to do this off my own bat.
I am currently taking a forced haitus from riding (other than hacking out to maintain muscles and mentality) so as to get the required license to tow the larger trailer I need for my claustrophobic mare.? This is taking time because I need to re-take the Code de la Route before I take the Formation whilst at the same time being re-trained for a promotion at work to be able to pay for the paper-work needed before I even consider buying the vehicle needed to legally tow it.? And to do this I need to improve my level of French.? I speak French.? But I do not speak Berryshon, the local Patois.? And I must if I am to understand a panicked farmer on the telephone who is trying to inform me that a calf is in breach and the cow has managed to struggle across the barn and trap herself under the feeder.
There are over 15 different Patois words for prolapsed uterus!? All uttered through clenched teeth with NO lip movement!? This is not an easy task when face to face with a client where you can use a certain amount of guesswork based on the facial expressions of the owner coupled by the obvious predicament of the animal in front of you.? On a telephone with other clients in the clinic gesticulating their needs at the same time this is nigh on impossible in your 3rd language.? I am half tempted to remain in my current role of Cleaner-up of Blood and Amniotic Fluids.? The Tarantino’s Mr Wolf of the Vet World.? But it does not pay sufficiently well to attend international events.? It does not pay sufficiently well to eat and get pissed of a weekend.
So you can understand why I thought to involve the hay-man.? But I won’t.
But if he involves himself … that is a different matter entirely.? hehehe

7 replies on “Is it wrong to date a man for his tractor?”

This is wonderful! I rarely post but I had to for this. 15 Years ago I met my one and only…. at a Military vehicle show! my heart fluttered, he was introduced as VERY useful… I said He’s very nice gazing at him… other friend said He’s got a UNIMOG which made me quite excited.. and his first words to me were Actually I have two…. great… one for me I thought. .. and that was it. He’s younger than me, equally socially inept and shy and my everything… and yes I do get to use the unimogs!!!! go for it girl xxx

Good afternoon Su! I just might go for it. Or I might not. AAARRGH!! I still cannot make up my mind. And to make things more confusing another, different, socially inept male friend (also aged 33 btw) saw my blog and messaged to say that he has liked me for ages. Madness! It is like waiting for public transport – nothing for 5 years then 2 at once. lol.

Sounds to me as though you have a strange a-tractor there!

LOL ! I do. And we celebrated our first anniversary earlier this month.

[…] only regret is not wearing a head-cam.  Frederic did really well filming considering he is a total technophobe but my telephone did not pick up the […]